Basically, AppArmor is a security enhancement for the Linux kernel, which restricts access to resources. AppArmor can use different profiles and enforce several rules to related components.

Some components which can be used:

In Docker and Kubernetes world, you may want to avoid malicious actions when an attacker gains access to the container. Of course, AppArmor will not be enough without any other prevention.

I’m gonna use Ubuntu 18.04 in this tutorial. In some cloud providers, AppArmor already installed on this version, but if you don’t have it, just run it:

You can list the existing profiles and show the current status as shown below:

You can also use: 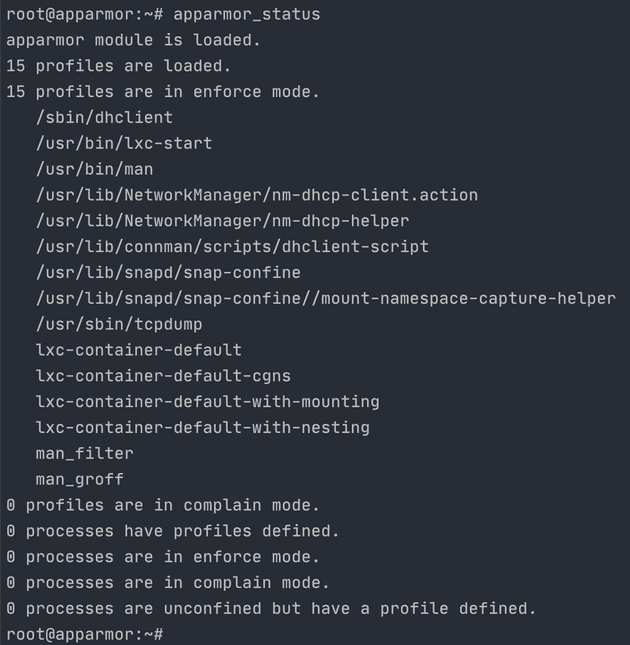 As you can see in the screenshot, 15 profiles are running in Enforce mode.

AppArmor profiles are based on text files and located under /etc/AppArmor.d/ directory. The following screenshot is showing the rsyslog profile. 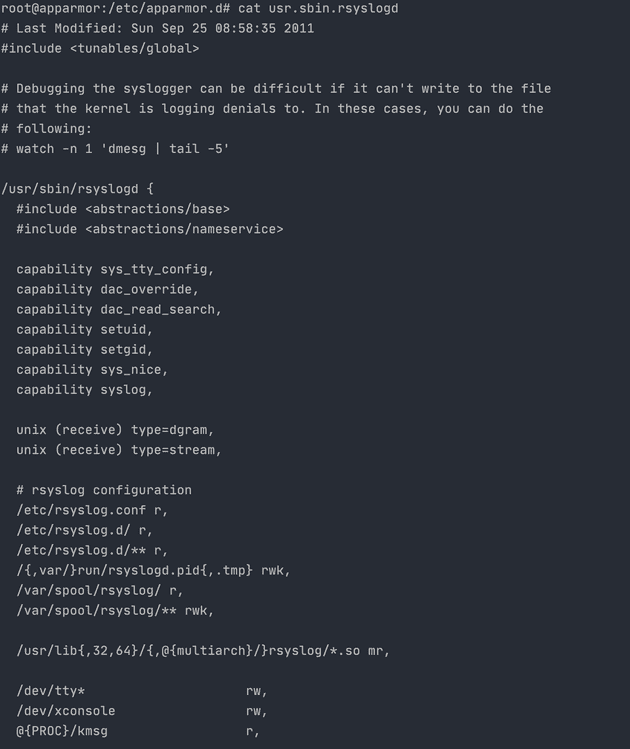 The lines which contain “r”, “w”, “rwk” at the end of the line are path entries that provide which files and directories can be used by the application.

Let’s create a profile skeleton to use with Kubernetes later. Profiles can be created by text file or aa-genprof tool.

This profile grants super access on the file system to the application except for executable permission on the /root directory. If you want to specify the entire file system, you can declare deny variable like:

Even we can use regex patterns to specify any file or directory names. Here is the part of the list of file-level permissions on AppArmor:

Now reload the our profile:

As you can see, our deny-profile is loaded and running as enforce mode.

Let’s create a pod with Alpine image and declare the AppArmor profile. To do this, we must use ”container.apparmor.security.beta.kubernetes.io “annotation. Then specify the profile on the local environment. If the profile name doesn’t match in the YAML file, you’ll get an error message about that.

Our expectation is we can’t create anything under the /root directory with “touch” command. Create the pod and try to read somethings on /root path.

As you can see, we couldn’t create a new file via touch under the path. To prove it in another way, now we can try to create a file under the root path.

No any error. You can also check the Kubernetes events that profile assigned to the pod.

It’s possible to create AppArmor profiles with Kubernetes via some third party APIs as a kind.

Note: Deny rules cannot be overridden by an allow rule.

Let’s make another sample to deny network access. We should restrict “inet” and “raw”.

To check the “ping” utility inside the container, you can use an image that already includes a ping tool, or you should install net-tools in the container. After applying the AppArmor profile, try ping to google.com.

AppArmor profiles can be used with PodSecurityPolicy.