In this tutorial, we will do the ad-hoc, cron job, runlevel changes and package management operations with Ansible respectively.

The point to note here we should use password_hash parameter with the ‘password’ argument.

There are multiple ways to do this, but the question was asked to use authorized_keys module. You must point your public key path in ‘lookup’ argument.

‘sudo’ task can also be done in different ways. Let’s use ‘shell’ module and add the required line to the end of sudoers file.

We are using the NOPASSWD variable because passwordless access is requested.

The final version of the script should look like this.

Let’s run the script and verify the changes on the remote instance.

To remove the first seven lines, you can use any related command whatever you want. To do that for every two hours, you must declare ‘hour’ parameter with ”*/2” and the last requirement that the job must run on only Fridays. ‘5’ is numerical equal for Friday.

After the file is running, we can check the job. 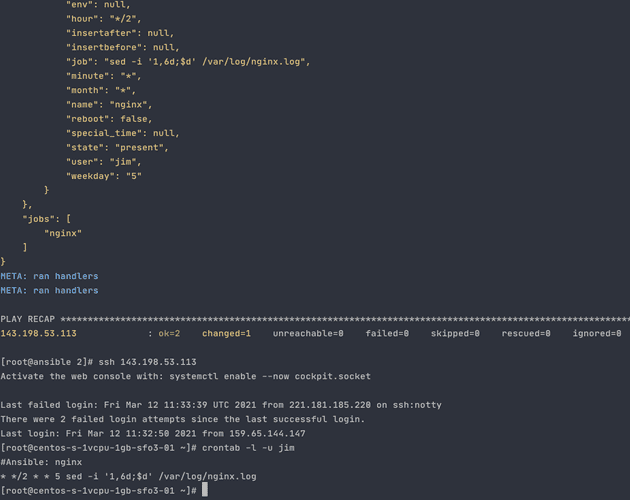 Okay, this can be done in different ways. I’ll show it with link module.

p.s. The target change may differ depending on the distro type and version you use. CentOS 8 is used in this example.

We can verify the change with the systemctl get-default command.

There are two important points: We should use with_items and when condition to define related host groups.

The shortest way to update all packages is to use the * character with the latest argument. This process may take some time depending on the connection speed of your server.